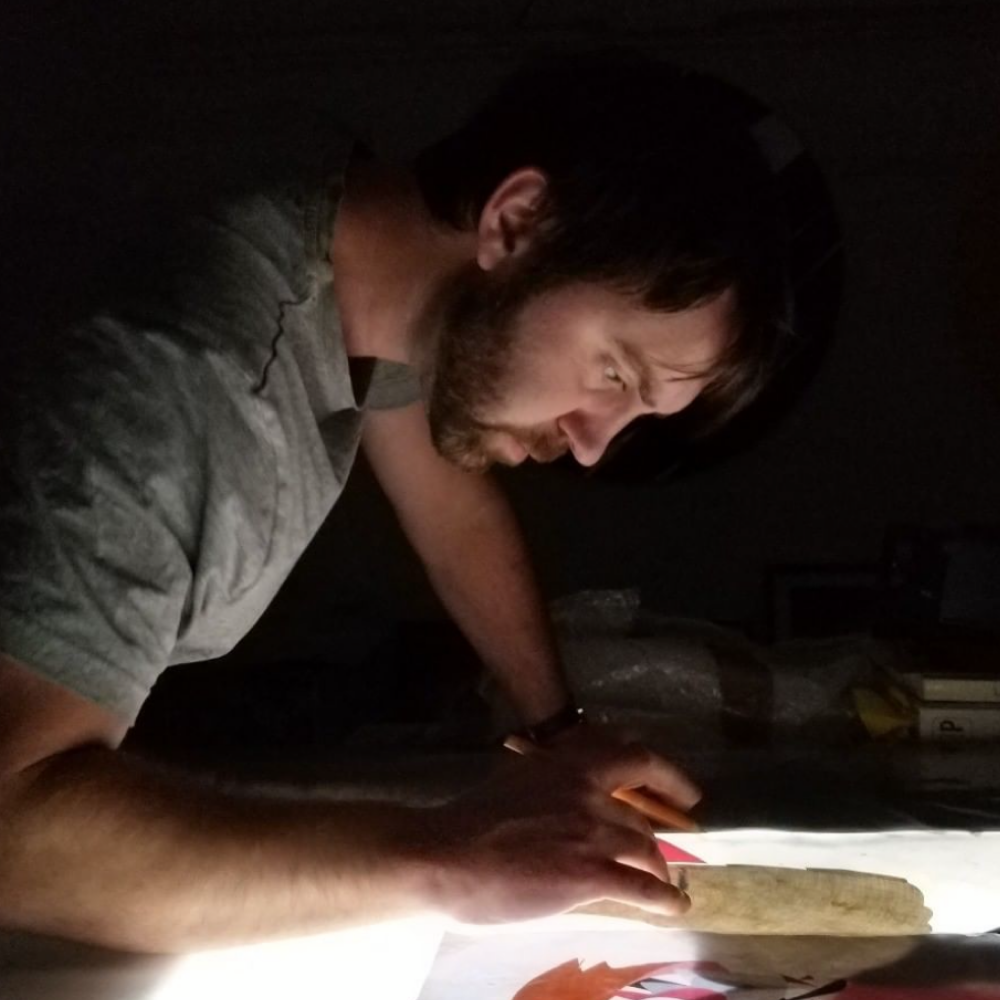 Mark Elliott Smith’s practice investigates formal relationships of colour and shape and their potential for emotional affect, and examines the capacity of art to animate a space in a positive way. He is interested in how new forms can emerge from a pre-existent field. Seeing thoughts and ideas as patterns, he builds images which are analogues of the process of construction and destruction, fragmentation and coherence.

Although his work does not reference anything in the material world, Smith invites the audience to project their own imaginations into the work. His intention is not to confound the viewer but to energise by suggesting a magnificent view of possibilities to people tangled up in an everyday routine.

Valuing calculated gestures and their spontaneous by-products equally, he digitally collages initial marks, appropriating, rearranging and amending elements sourced from his library of motifs taken from previous works or from further small sketches. He then manipulates them further towards a sense of dynamic unity with the illusion of three dimensions, looking for a taut balance between chaos and order. His preferred square format constrains and intensifies the underlying circular composition.His works on paper follow the same rhythms.

The enlarged images are meticulously and systematically painted in flat colour with a smooth or subtly textured finish to reveal and amplify previously hidden information, both visual and psychological. Initially inspired by his own childhood drawings, his works reference artists such as Miro and Kandinsky while his dynamic clean-edged forms owe something to the Vorticists and to post-painterly abstractionists such as Frank Stella.

The titles of his paintings, though they parallel rather than describe the work, are precise and are chosen to function as micro-poems analogous to the images.

Mark lives and works in the UK. He received his BA in Fine Art from the University of Plymouth in 2006 and has exhibited with galleries in London and the South West of England. He has been commissioned to paint a number of murals for a prestigious boutique hotel and has been invited to give talks and workshops. 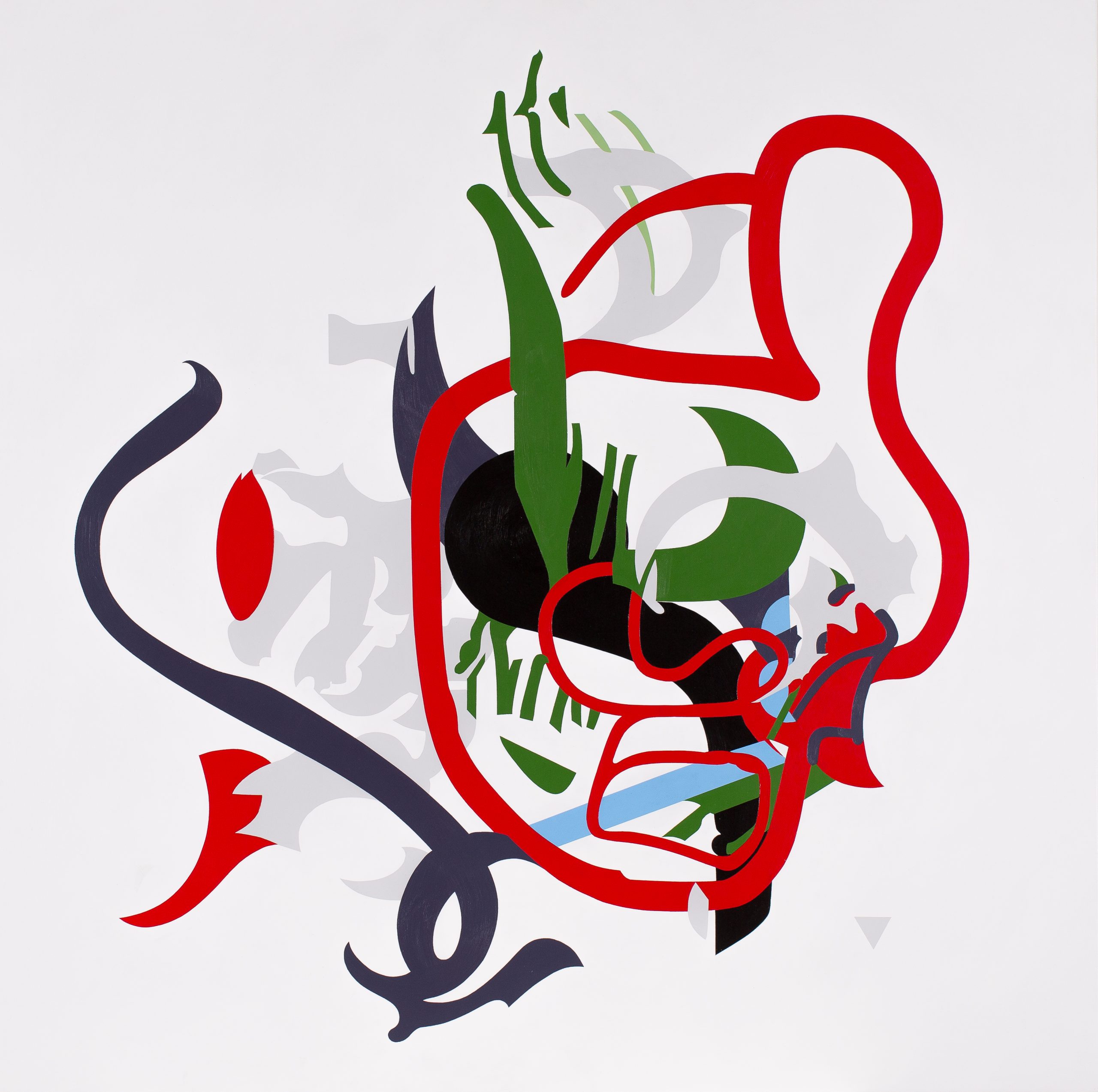 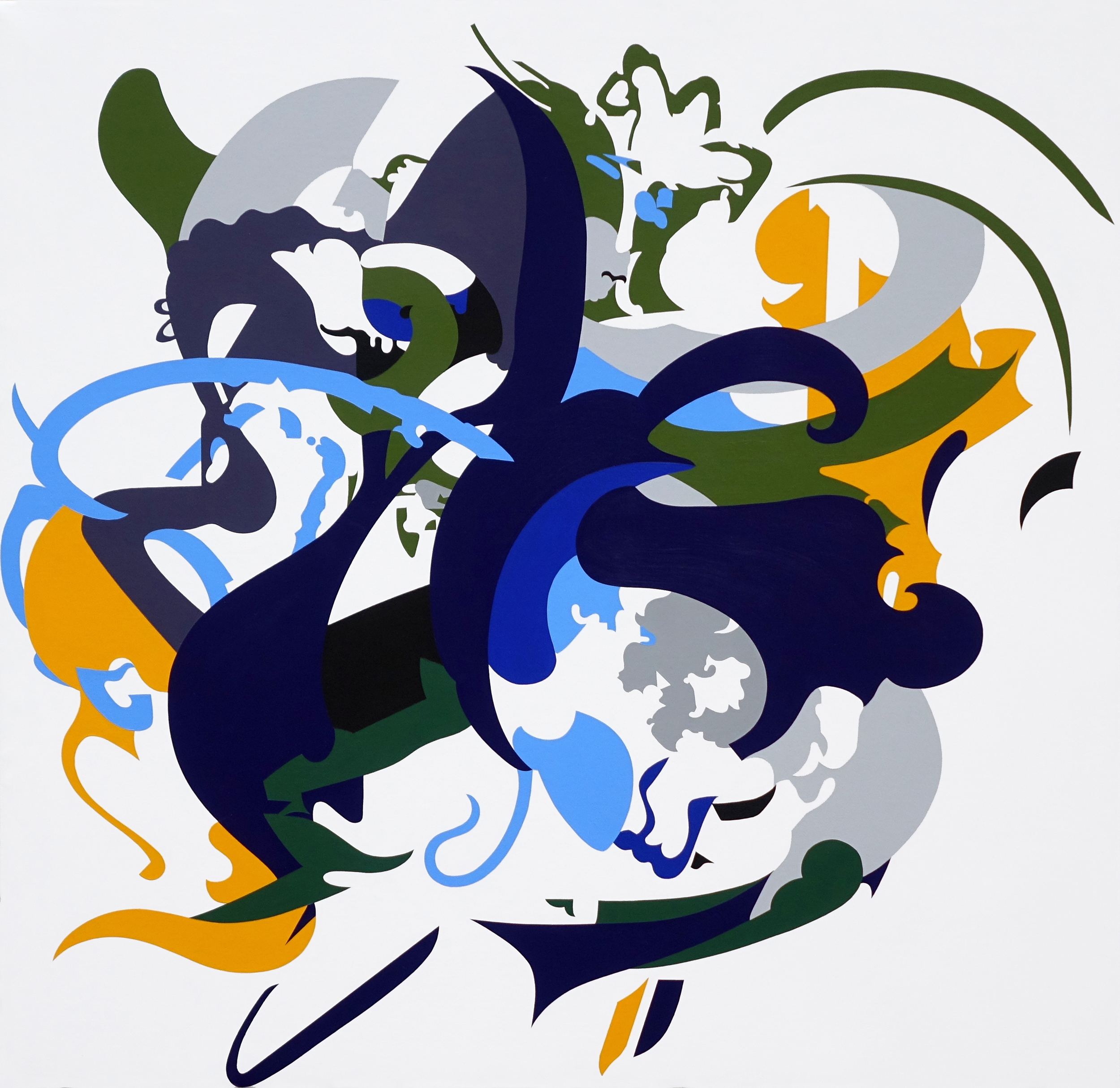 Round The Rim Of A Dream In A Peacock Den 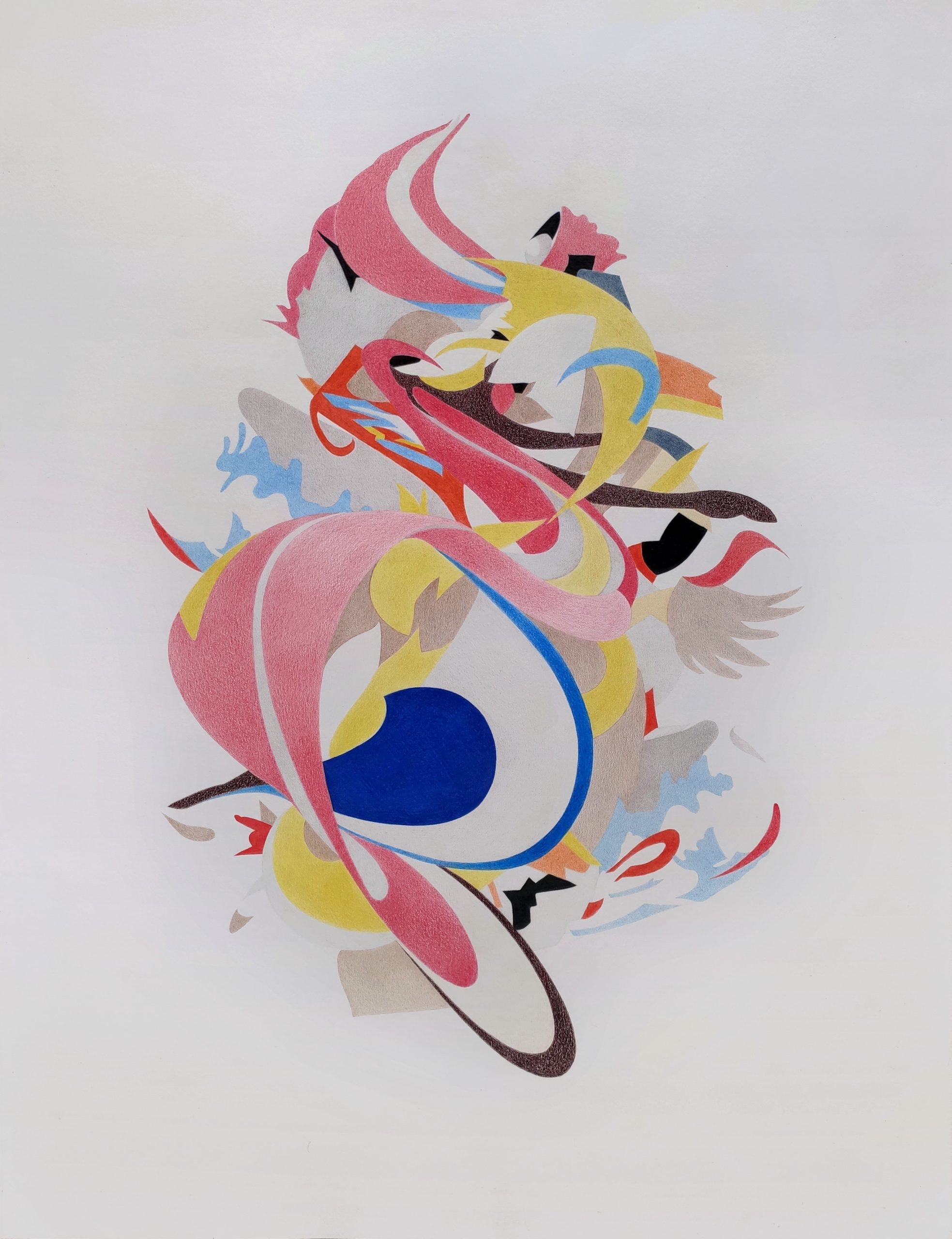 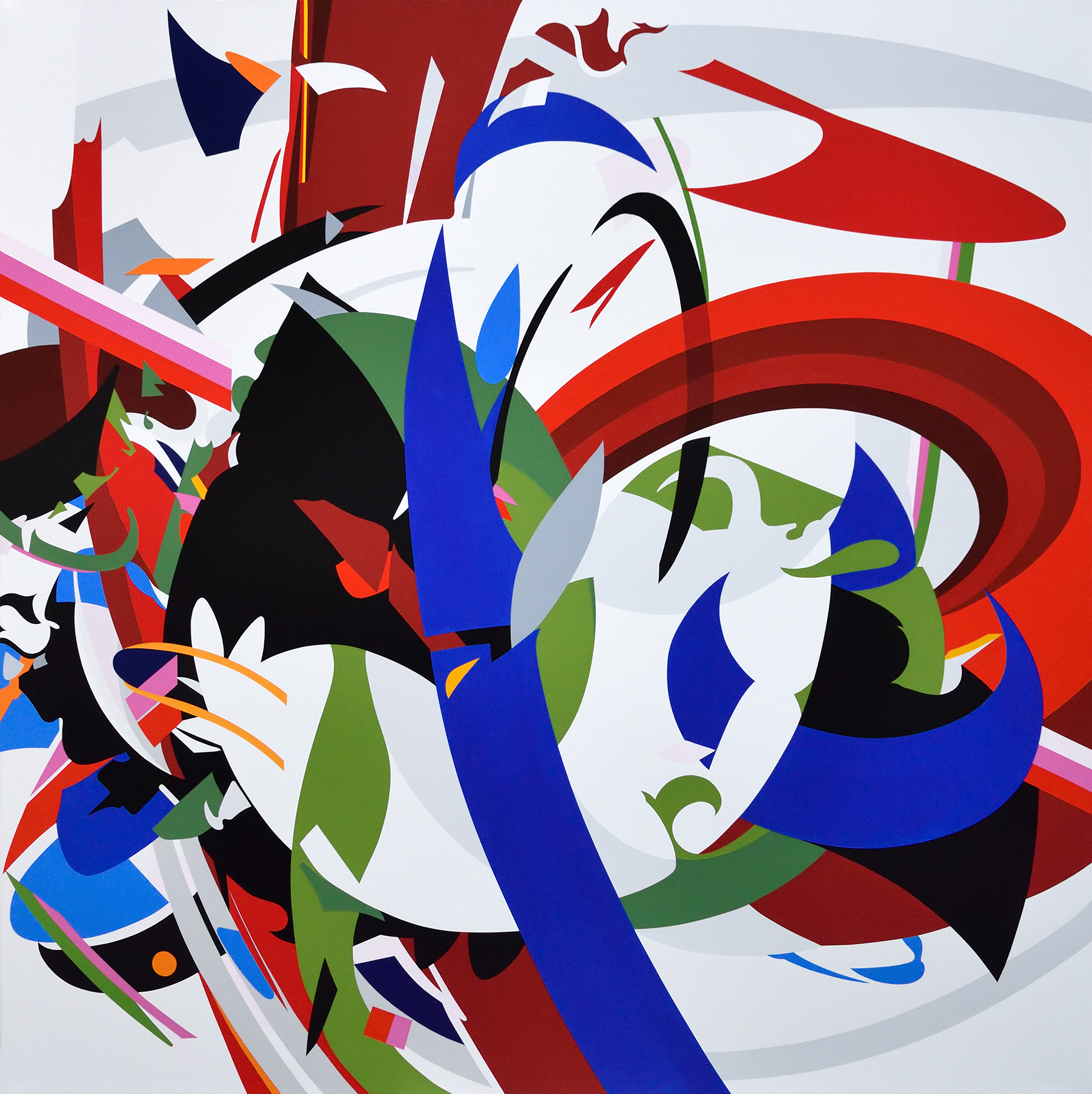 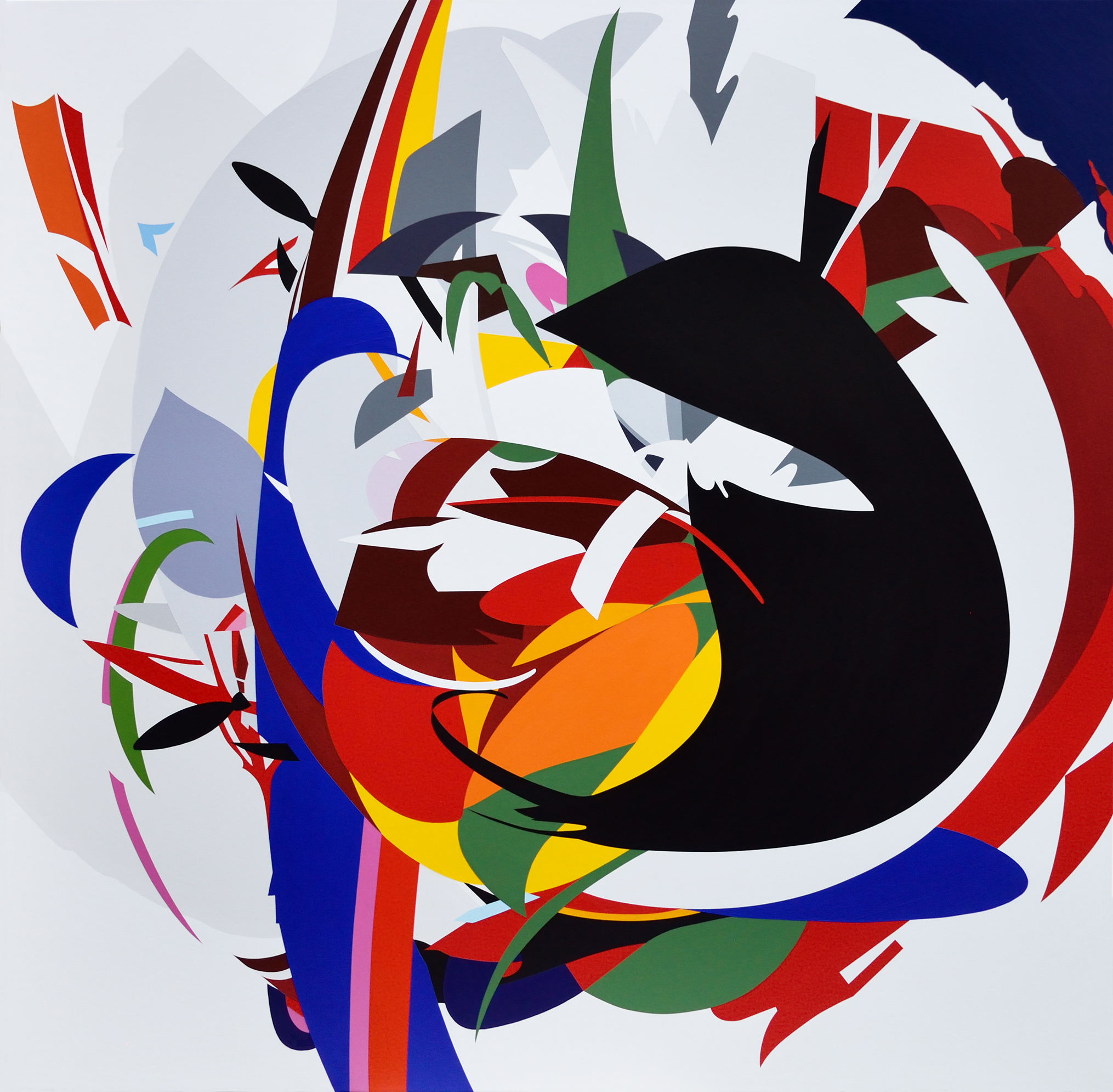 Dancing With The Birds Of Paradise 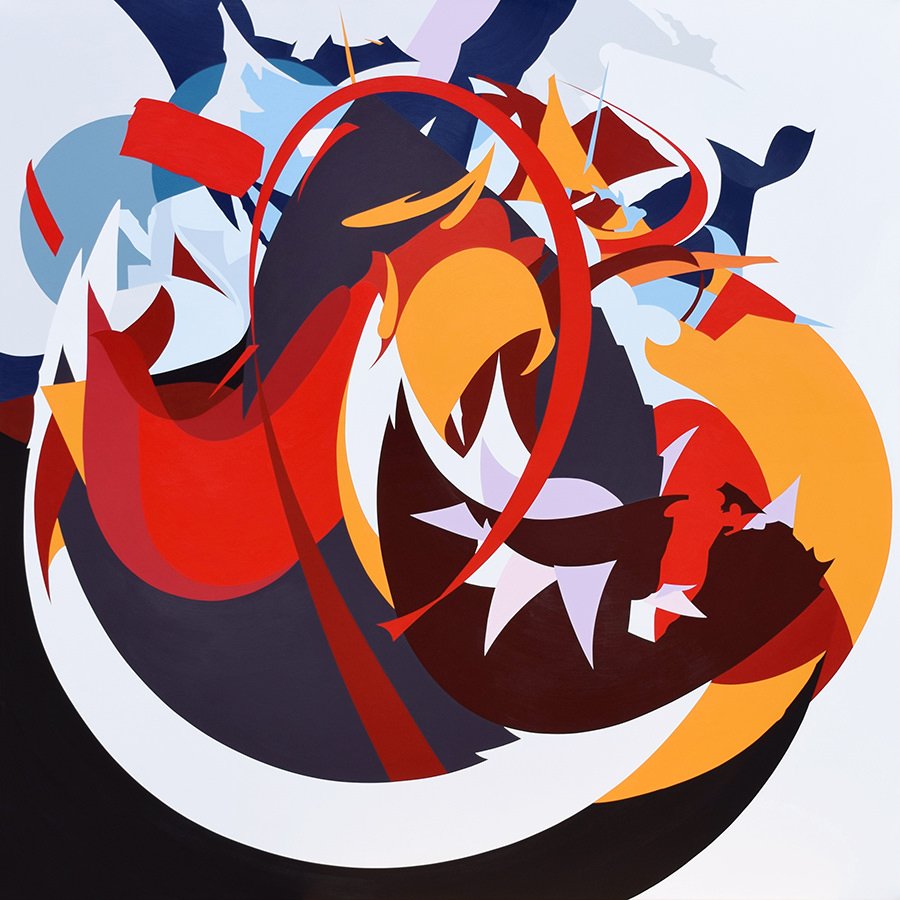 Leaping Through the Heart of God

Smashing Through the Hush Up in Cascading Wings of Ecstasy 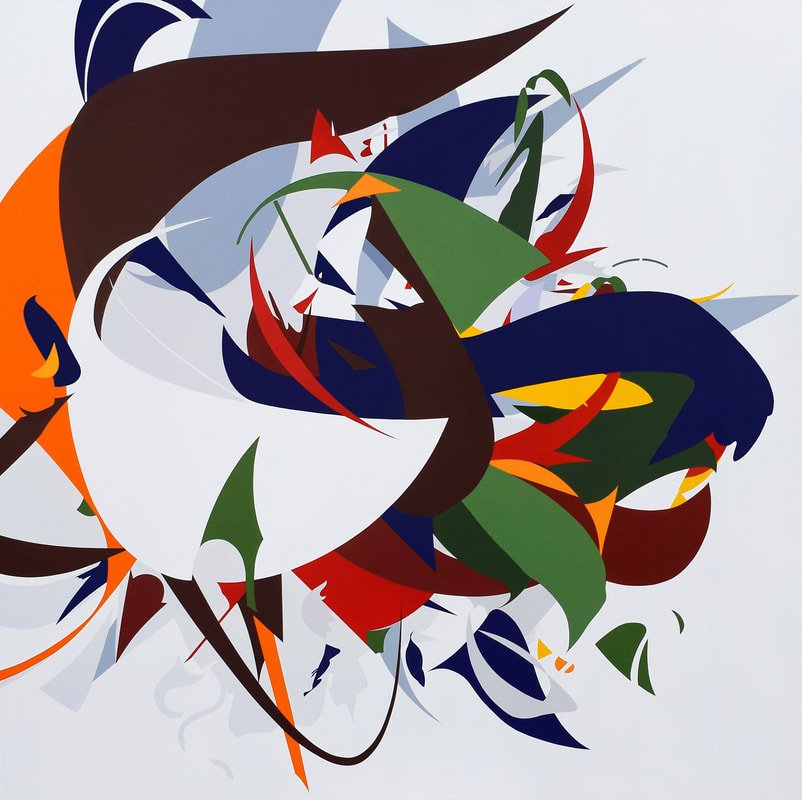 Dancing With Fire, Touching The Sky, Kissing The Sun 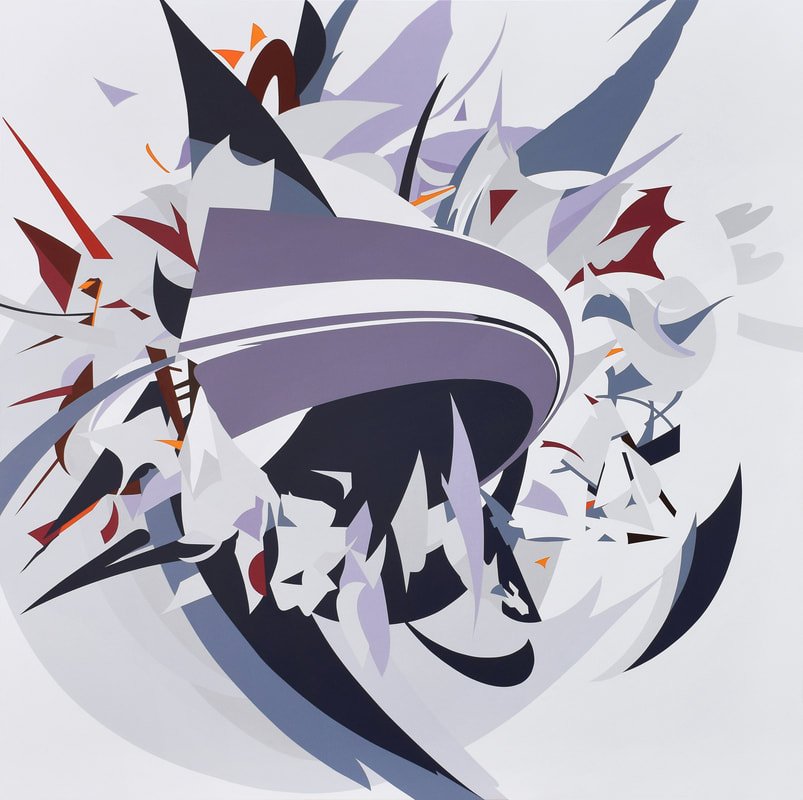 The Fixed But Fluid Pattern Of Absolute Suggestion 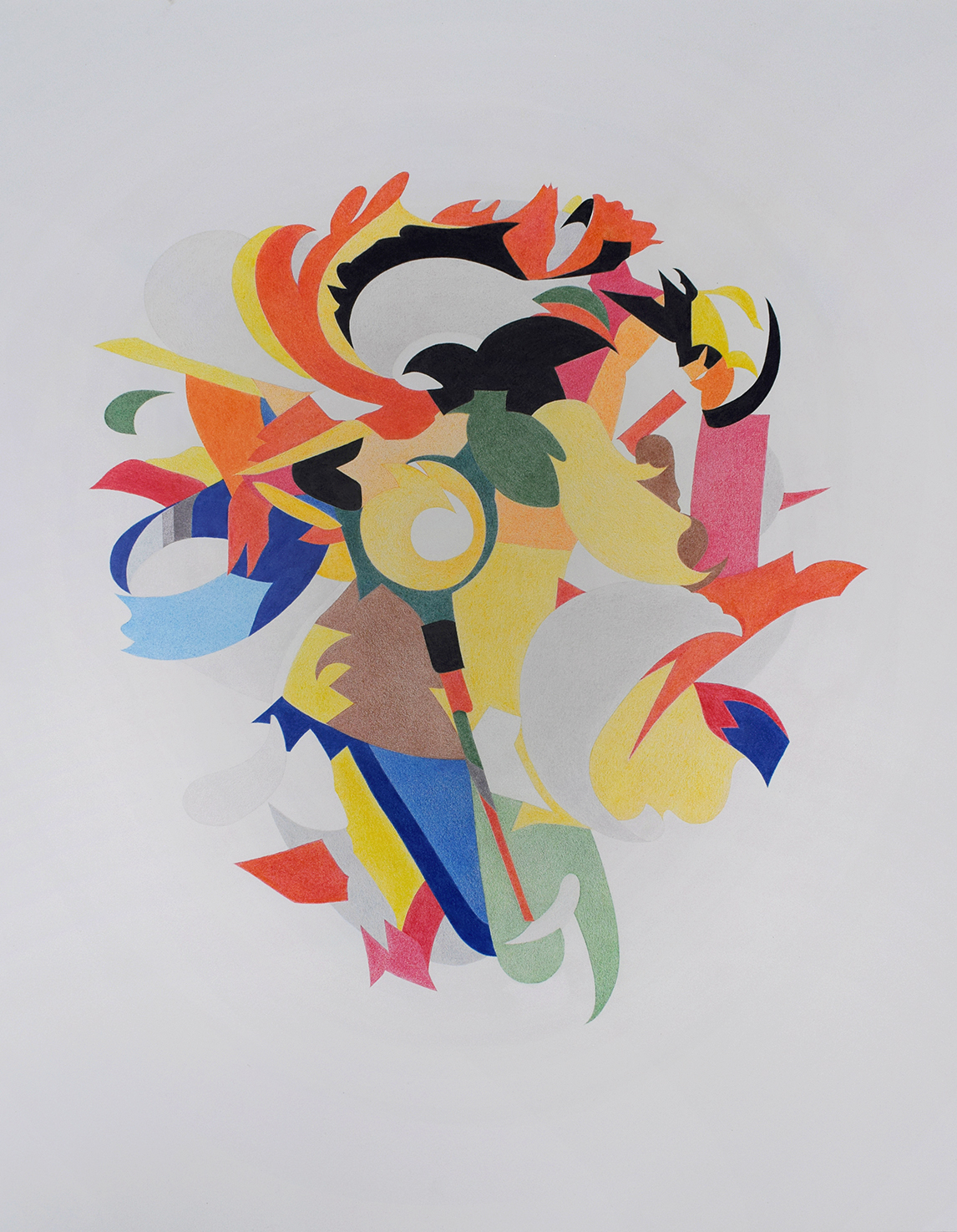 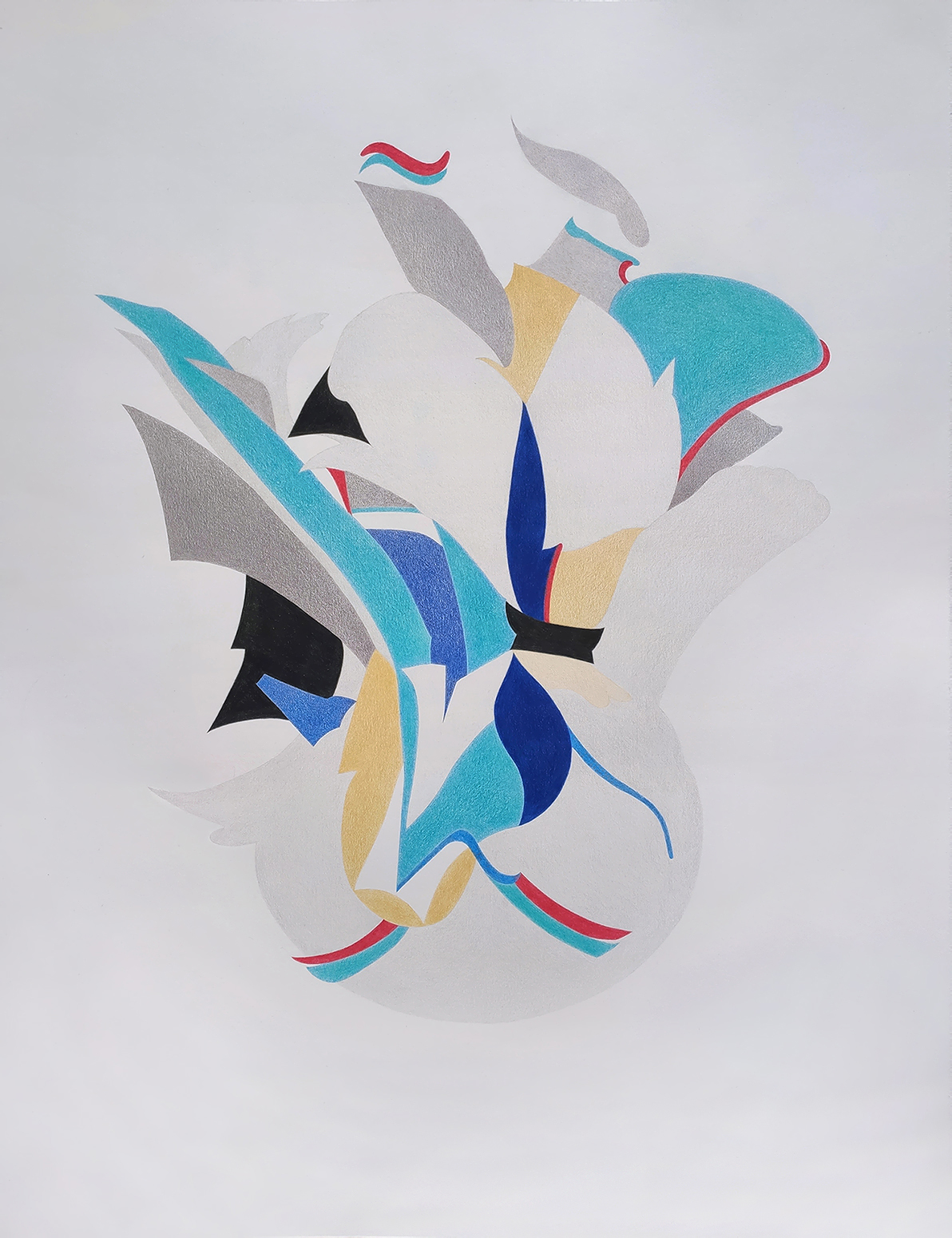 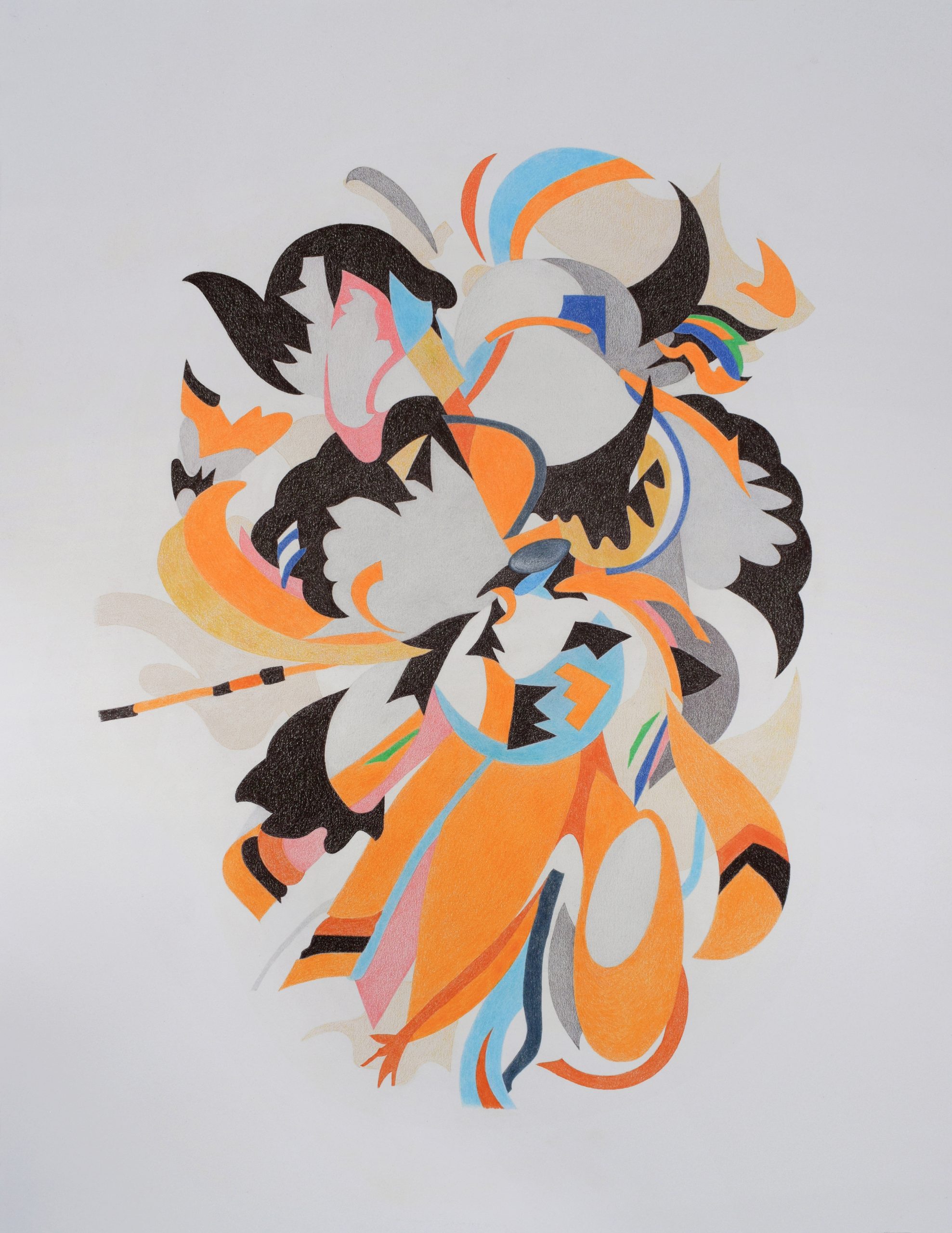